Our 16 speed Bromptons are now just that. We built our own wheels earlier in the year and I then went through the process of getting everything to work together. I had already spread my rear forks a couple of years ago and did the same on Damae’s Brompton. A few tweaks were needed on her bike to get sufficient clearance between the spokes where they come out of the Nexus 8 hub and the fork and the rear derailleurs had to be shaved with a ‘Drehmel’ to provide enough clearance for the Nexus 8 gearchanger.

We’ve managed to put around a hundred kilometres on the bikes and they will be used for our summer tour. This will be a sedate affair because of Damae’s condition, taking in part of the NSCR in Germany and Danish cycle route 5 between Fredericia and Grenå. A travelogue will eventually get written as will a full report of the conversion.

From our point of view the conversion has been well worth the effort and money. The gearchange (with the single twistgrip) is fantastic compared to the 2×3 SRAM Brompton setup we previously had. The high range on the 50t chainwheel is good for general cycling, with a bigger range than the old SRAM 6 speed, and the low range on the 34t cog allows climbing up steep hills fully laden. Only time will tell if the setup is reliable.

For the time being, here are three pictures of my bike set up for touring. We’re using my “Brompt-o-lieb” adaptor frame to mount two front panniers on the back of the Brompton bag. We’ve used these a couple of times for short trips and the bikes are very stable even when loaded with weights of around twenty kilograms. At the moment the front bags and contents weigh around sixteen kilograms which is a lot less than we normally take when touring with ‘proper’ touring bikes.

My main worries for the trip are:
a) the Brompton derailleur breaking
b) our home made wheels failing
c) being unable to get the Schwalbe Marathon tyres off the Sun CR18 rims. Getting the tyres on is trivial with the Simson Tyre Mate (recommended purchase) but I managed to break the Var Tyre tool the first time I used it to remove a tyre.

Finger’s crossed, wish us luck (although “Hals- und Beinbruch” might be more appropriate). Here are the pictures: 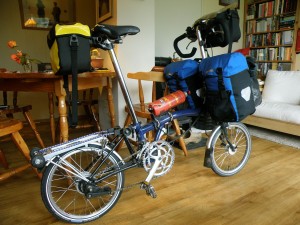 Rear view of my Brompton. Both bikes have two bar bag mounts and we will be using both of them. I fitted a rear rack to my bike, for two reasons:
1) it acts as a damper reducing high frequency buzzing from the rear wheel
2) The bike, when folded rolls better with a rack than without it 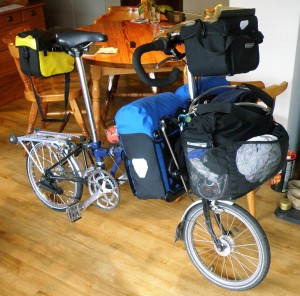 The outer edge of the Brompt-o-lieb is just visible in the picture. Loaded with 16kg the bike is much more stable than with 10kg in a Brompton bag alone. The bags can be removed as a single unit with a little extra care and carried around without removing the Ortlieb bags. 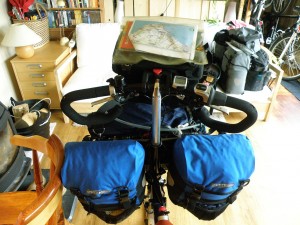 View of the ‘cockpit’. There is plenty of knee room when cycling. Starting off takes a bit more care with positioning the pedals for the first down stroke. The handlebars are adjustable with a long allen key the lower sections can rotate upwards. In this position the bike still folds. I modified the handlebar stem using a rigid seat post rather than a sprung one as is more usual.

This site uses Akismet to reduce spam. Learn how your comment data is processed.