The tyre is a Schwalbe Marathon pumped up to near normal pressure. The cross piece is the one at the bottom of the triangle next to the rear hinge. The bike is upside down in this picture.

The rear triangle has been opened out to accommodate a narrowed Nexus 8 Red Band hub. The OLD for the Nexus in this configuration is around 122mm. The rear dropouts have been widened by 1mm which is necessary to fit the Nexus dropout washers. The 1mm has been removed from the “back end” of the dropout which sets the hub a little further away from the cross piece than if the metal had been removed from the side of the dropout nearer to the front of the bike.

If you open the fork out to accomodate a hub with and OLD of 135mm then this gap will decrease further. 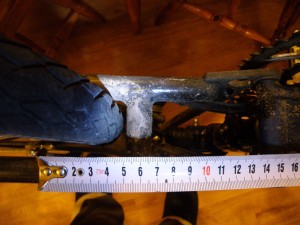 2) Sprocket to end of fork tube.

This is a 16 tooth sprocket mounted with the dished side facing the hub. This is to push the chain line outwards a few millimetres. The white object on the left inside the ellipse is the sprocket and the end of the fork tube is to the right of it. Clearance is minimal but sufficient. The chain has been moved off the sprocket to take this picture. 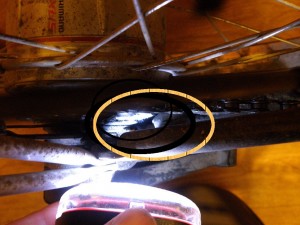 3) Spokes on the non-drive side to rear fork tube.

There is just enough clearance on my bike but I had to put a couple of small dents on the inside of the tube on Damae’s bike. If there is any significant play in the wheel bearings then the spokes will start to make contact with the rear fork (as the front of the wheel will be pulled to the left by the chain). The bike is upside down in this picture. 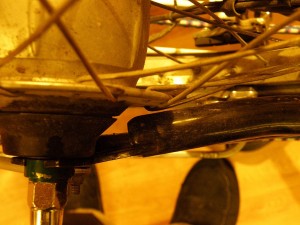 Spoke to rear fork clearance on the non-drive side of the Nexus 8 hub.