Last weekend we decided to give our 16 speed Bromptons another test. The test was to cycle the Rallarvegen in Norway from Haugastøl to Flåm. We have wanted to do the Rallarvegen since we moved to Norway almost three years ago and the Bromptons would make getting back home on the train a little easier.

We took it gently, mainly because Damae is now 26 weeks pregnant. On the Friday we cycled from Haugastøl to Finse and camped at the DNT Finsehytta ‘campsite’. Saturday we cycled from Finse down to Flåm and took the Flåmsbanen back up to Myrdal. The weather was brilliant and the Bromptons created a lot of interest. 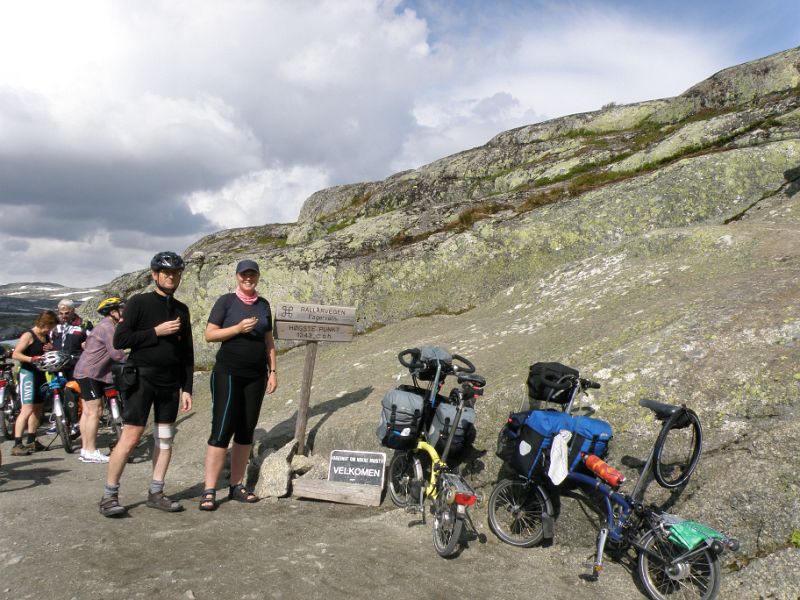 The trip gallery is here.

Our summer tour to Germany and Denmark was a great success. Not only did we follow the route we had planned (with two minor deviations) but nothing broke on the bikes or our luggage systems. We didn’t even get a puncture. The rear wheels were still true at the end of the trip and the gears, both the Nexus 8 speed hub and our front derailleurs worked as intended. The Nexus 8 in particular was much appreciated by the both of us, freeing us from the irritation of the Brompton two-shifter-for-six-gears system. Our two shifters now give us pretty much all the gears we need, with a total range that approaches that of a Rohloff Speedhub.

The range of the Nexus 8 (around 300%) means that we have two usable gear ranges. For general use we can stay on the 34t chainring up to speeds of 20km an hour before shifting to the 50t chainring at higher speeds. Using the gears this way gives six gears (low 6,7,8 high 6,7,8) with roughly even gaps between them. Although not as convenient as a Rohloff, the two chainring system with a hub in the rear wheel is a lot simpler to use than a three chainring derailleur system.

We both liked the adjustable handlebars: I used them in the “foldable” position when cycling into stiff headwinds. In this position I was surprisingly comfortable. When we had a good tailwind I tended to put the bar ends up vertically so I could sit bolt upright on the bike. In variable conditions I had the bars in the horizontal position facing forwards. Damae usually just had the bar ends raised to around fifteen degrees above horizontal occasionally raising them more when we had a tailwind. But we had no problems with numbness in hands or fingers. I am considering getting some more of these bars for two of our other bikes.

One thing that surprised us was the brakes. I’ve never been terribly impressed with the Brompton brakes and have investigated getting V-brakes bosses and brakes fitted to the front forks. While we were still living in Holland our LBS at the time (SNEL tweewielers) suggested we tried some cartridge brake blocks usually used on racing bikes together with some ‘salmon’ brake blocks. I also fitted V-brake levers to both bikes as the old style Brompton brake levers, whilst light, just flexed too much for my liking. On this trip we did not have any problems with the brakes. Either we got used to them or they work well enough now. On a steep descent we still need to pull harder than with V-brakes or Magura rim brakes but the bikes stop quickly enough.

The only thing we are planning to alter is to fit new hard suspension blocks to both bikes. Even with a jubilee clip on both suspension blocks we were wasting too much energy making the bikes bounce up and down. The new blocks have already been ordered so I look forward to seeing how that improves the bikes.

We will definitely be using the Bromptons in this way again in the future. They are comfortable for long days in the saddle and can now carry all the gear we like to take on holiday. With the improvements to the gears we now have bikes that we can use here in Gol or anywhere else in Norway, instead of having them sitting on shelves gathering dust.