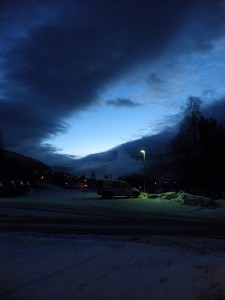 The disappointingly autumnal weather has melted most of the snow but left patches of sheet ice. On Monday evening both Damae and I both found our own patches of ice and took a tumble. In my case landing heavily on my right shoulder bruising my right hip. The following day the doc said that she was pretty sure nothing was broken and gave me permission to eat lots of paracetamol and ibuprofen.

The upside of the warm weather is some amazing clouds and light. To enjoy the views you need take your eyes away from the task of trying to find patches of ice on the ground for just a moment. Ideally you need to stop and stand still, rotating on a secure patch of ground. If you do this, you will be treated to a feast of misty and atmospheric views.

Yes the “drittvær” is  generally not much fun at this time of year. But, as the famous Dutch ex-international footballer Johan Cruijff once pointed out, “Elk nadeel heb z’n voordeel.”

Well the flu outbreak is now an epidemic, at least according to the “Folkehelseinstituttet”. The advice is to stay at home and don’t think about going to work until you have recovered fully.

Well I have been on this sick this week after a dose of the flu. Damae had the flu the weekend before, so I just had to make it a his’n’hers infection. According to official figures we are part of the new winter flu outbreak here in Norway. 2.7% of all people going to the doctors in the last week got the diagnosis “flu like illness” which is well above the 1.4% limit for it to be an official “flu outbreak”.

Damae was quite unwell for one day, took the next day off and went back to work on the third day. She signed a declaration that she had been sick herself and handed it in to her employer. As I am still in my probationary period at work, I had to go to the doctor and get a ‘sykmelding”, (a good old fashioned doctor’s note), from the first day. I can’t just fill in a ‘self declaration’ form like Damae can.

However, this turned out to have a very fortunate side effect. During last weekend I was really rather unwell, didn’t eat much and was unable to sleep for two days. I wasn’t well enough to go to work on Monday but had I still been living in the Netherlands or the UK would probably have dragged myself coughing and sneezing into work on Tuesday, munching my way through the maximum daily dose of Ibuprofen and Paracetamol, whilst infecting all my collegues.

When the doctor heard my list of symptoms she gave me a sick note up to and including the 23rd (tomorrow). Which is most of the week. This is at least two days longer than I would have judged as being sufficient for my recovery. The logic behind this was that I had not had a proper weekend and in any case needed extra time to get over the relatively severe symptoms. I’m quite thankful that this is how things turned out as I am still recovering as I write this.

Which is a subtle yet important difference.