It is snowing like mad and it’s not as if we can do much about it. If King Canute had tried to stop the snow from doing its thing, instead of the sea, he would have ended up looking like a very large meringue. I’ve been out twice this evening moving snow around. Here I am doing my Banksy impersonation whilst clearing snow off the roof of the bike shed. 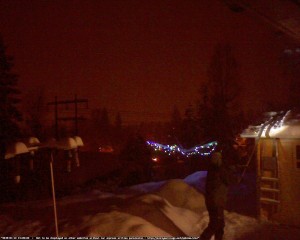 It looks like it will be difficult to use the bike trailer to take Odd Egill to barnehage tomorrow. So the pulk has been taken out of storage readied for use.

Yesterday was our first family outing with the pulk. We were out of the house before nine and headed up to our favourite spot on Golsfjellet.

We were rewarded with a wonderful sunrise, bright oranges and reds in the east… 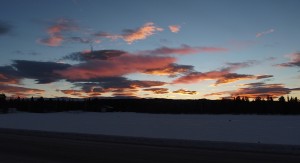 …and gentle pinks in the West.

Damae took charge of the pulk which was nice of her. This was my first proper exercise in a couple of weeks so I needed to take things easy. 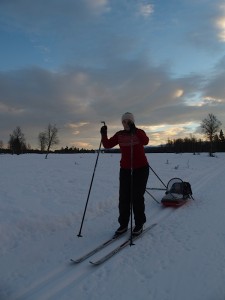 We threaded our way along the ski tracks towards “The Pole”. This is a signpost that stands at a junction of five prepared ski routes a couple of kilometres from Kvanhøgd turistsenter. 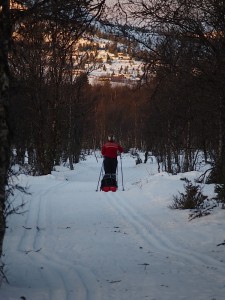 Short of snow but plenty of sunshine.

The snow was actually ice and very slippery. It was a couple degrees above freezing when we left the car and warmed up for the the outward leg of our journey. 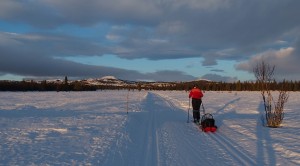 We reached the pole as the sun started disappearing behind thin clouds. The breeze strengthened slightly making it feel colder than it actually was. We decided that it wasn’t a day to be sitting around drinking tea so we turned around and headed back to the car. 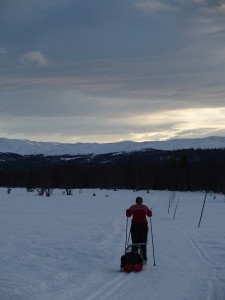 With the sun blocked by clouds the temperature started to drop.

Once back at Kvanhøgd we got the little man out of the pulk and into the Syncro and packed away our skis. We ate a bit of lunch and drank some tea before heading back down the hill to Gol.

We had a lovely tour despite the poor condition of the ski tracks. It was just fantastic to be sliding along on our skis again whilst taking in the views on Golsfjellet. We’d basically missed the previous skiing season entirely: by the time Odd Egill was old enough to go out in a pulk the snow had gone and our cycling season had started.

Odd Egill seemed to enjoy himself in the pulk in much the same way he likes being in his bike trailer. Which is good news!

More snow is forecast in the next few days. Fingers crossed, we might yet get few more family outings with the pulk before the cycling season starts in earnest.

So much for buying two sets of Ice Spiker tyres! This afternoon we went out for a short run out to Herad and back, and would have managed fine on slick racing tyres. 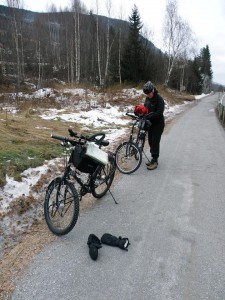 Actually the mild weather is a bit of a blessing. It means we might get the chance to run in the studded tyres before we need to use them in anger. According to Schwalbe you need to cycle around forty kilometres on bare asphalt to bed the studs in correctly. Today we managed just over twelve kilometres which is better than nothing.  The tyres, when inflated to three bar, roll surprisingly well on tarmac. I tell you what, it felt good to be back in the saddle again! 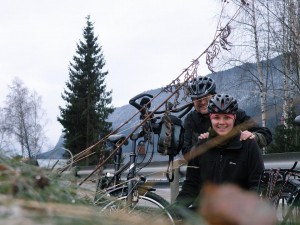 Yes it was great to be out cycling again and we’re definitely going to be out again this winter. We’ll have to work out strategies to deal with wind chill though! 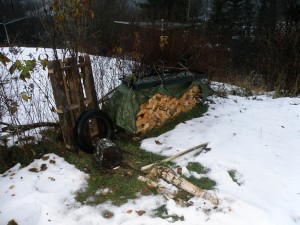 The end of the first woodpile. We’re now cracking through the second one. There’s something very satisfying about warming your home with wood you prepared yourself…

Yep, our VSF bikes are now fully equipped for winter. Well at least in the tyre department. 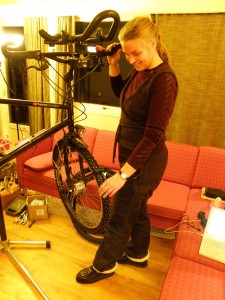 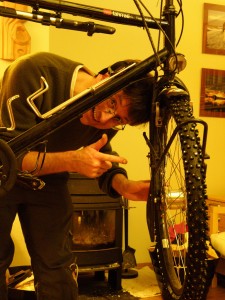 Phwoaarr. Look at the studs on that! 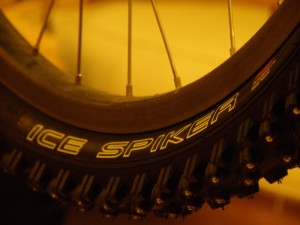 The right attire for the season

Last week, as Friday evening approached, we came up with the idea to have a day out in Drammen and clear a few things off our long term shopping list. In addition, the snow that Bernt the Badger had wandered through that night, that fresh damp white layer, was due to disappear in a weekend of rain and distinctly unseasonablely warm temperatures. There would not be much to do in Gol or on Golsfjellet on a grey and wet November Saturday.

We got up early and headed off to the big city to the east of Gol. A navigational error, (satnavs only do what you tell them to) took us past the Biltema store that I had wanted to stop at first. The Rv 134 has no junctions between Mjøndalen and the centre of Drammen so there was no way to turn round. After a grump we re-jigged our day. We did our food shopping at the “innvandrersjappe” near to the hospital and found fresh tofu and other chinese delicacies to squirrel away in our kitchen. Then Damae managed to try out the only acoustic mandolin in Drammen before we retraced our steps back to the Biltema. 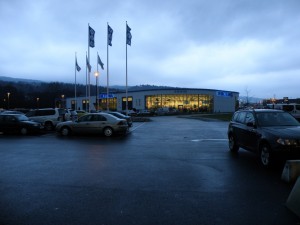 The shop was very busy, but, after waiting in line at the parts department we came out of the shop for the first time with a new alternator for the Syncro and some brushes for the old alternator (that would hopefully get us home). We had to return to the shop to get the alternator swapped, the pulley had a noticeable dent in it, a process which took another fifteen minutes. By the time we had finished our second tour of the shop we were ready for a cuppa, in fact ready to go home. We crossed the car park as Damae had spotted an in-store cafe in another shop, which we wandered into a little bemused and looked up at the spartan menu.

To my surprise I used the Dutch word “patat” instead of frites, and later after the coffee described the samosa we’d ended up buying as “pittig” (the Dutch word for spicey). It was then, in that moment of reflection that I realised that I associated the “out of town shopping centre” with my time in the Netherlands. Drammen is a good place for shopping but just as busy as Utrecht and just as cosmopolitan (a word you could not use to describe Gol). With the exception of the hill behind the Biltema it could just have been anywhere in the Netherlands. It was as if I were back in my old life again.

The coffee and samosa gave us the impetus to go back towards Drammen, and pop into the Gulskogen shopping centre instead of heading straight home. The Syncro just fits in the multi-storey car park and we drove up to the first floor where we found a space to park. Our main aim for visiting Gulskogen was to pick up some studded tyres for our VSF bikes, so we could cycle in the winter. This done, we wandered vaguely round the rest of the large sports shop, and its clothes department on the floor above. It was close to closing time, and after some more aimless wandering we ended up in an open plan cafe next to one of the entrances to the shopping centre.

Here, after declining to take advantage of the “coffee and cake for 55 NOK” special (“the cappucino cake is really really good you must try it”) we found a bench seat with a view out of the busy outdoor car park. 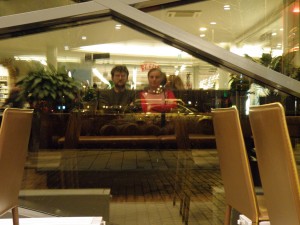 Reflecting on a busy day

To the left of us an older woman sat alone, reading a newspaper as if she were oblivious to the constant stream and sounds of people walking past. The waitresses carried on with the end of day cleaning and tidying, readying the cafe for the next day of conspicuous consumption. Apart from asking if we had finished with our cups, it was as if we were not there.

In Gol it is hard to go outside the house, and to the shops without seeing people we know or recognise. In Drammen we were anonymous again, despite (or maybe because of) being buffeted by the sea of people coming at us from all directions. However, I found it remarkably wearysome in a way I had forgotten. Not being able to walk in a straight line nor having the opportunity to take your eye off where you were heading for a moment. I had struggled every day in Holland with the battle to get anywhere and do anything. This was despite being able to buy almost anything I wanted within a half hour bike ride of our house. Sometimes I get a bit weary of having to order items I want in shops in Gol, waiting two weeks and remembering to pick them up, but this is quite different to the stress of the melee of a Gulskogen or any other shopping centre in a big city.

To the sound of clinking china and rattling cutlery we gathered our belongings together and got up to go. It was time to head west again. This meant joining the queue to get out of the car park which didn’t take too long but took much longer than any queue you will find in Gol. That was the extent of our traffic troubles, the Rv 7 was quiet, and the two hour return journey was uneventful. Well, apart from the alternator in the Syncro deciding to stop charging the battery properly. This was despite having fitted new brushes to it. Oh and the foul weather, mist, rain and high winds which kept our speeds below seventy kilometres an hour in places. Give me snow and twenty degrees below zero any day.

Somewhere between Drammen and Gol we crossed that unseen border, from the world of the big city to the fiefdom of the large village. Once past this virtual no-man’s-land we surrendered our anonymity again and returned to a place where people think they know who we are.