There are many groups of words in the Norwegian language, that can be difficult to tell apart or more importantly difficult to pronounce accurately for non-native speakers. I came up with this sentence last night during our Norwegian class, which illustrates this problem.

Er det lov å lyve om løven i låven? (
Is it permitted to lie about the lion in the barn?)

Then there are homonyms to keep things interesting. Here is another example from our lesson.

Vi skal løfte møblene opp på loftet. (We will lift the furniture up into the loft)
Du må love meg at du skal lufte moblene (You must promise me that you will air the furniture)
Javel, det er et løfte. (Yes that is a promise)

There is no way to differentiate between “å løfte” and “et løfte” except from context. I also found it quite hard to hear the difference between loftet, løfte and lufte. The trailing “t” of loftet is (almost) dropped so all that is left is the vowel sounds to differentiate between loftet and løfte. The word “lufte” while it isn’t a true homonym can still cause confusion to the untrained ear. More so if the sentence is spoken quickly or in dialect.

Of course, being confronted with vowels and homonyms is just part and parcel of learning a language. To be honest, I am glad I don’t have to learn English as a second language given that it is peppered with similar sounding words, spelling exceptions and erratic pronunciation.

We had sunshine and blue skies all day yesterday and it really felt like spring. By the afternoon, most of the snow in our garden had melted and the hills around us looked green rather than white. Our friend Marielle popped in for a visit and brought with her some sunshine. After tea, we took Marielle for a walk up to Gol Kyrka. The sun was still shining although there was a distinct chill in the air. 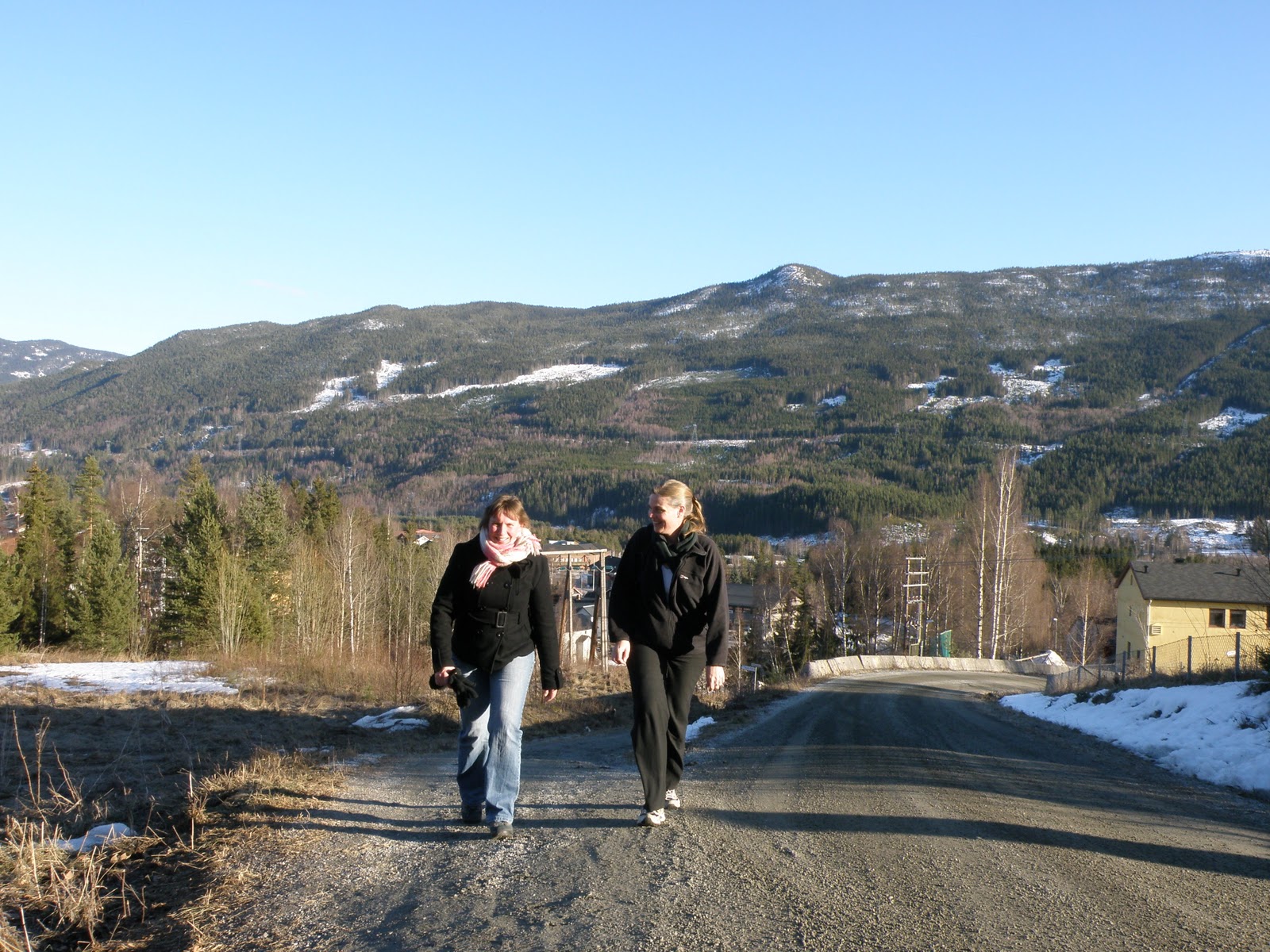 Today we awoke to fresh snow: slowly but surely the grass in the garden started disappearing. We went out to the Fretex so Damae and Marielle could snuffle round in the clothing section: I wanted to check if there were any more Mankell or Staalesen books for sale (yes there were!). By the time we left everything was covered in a thick layer of snow. 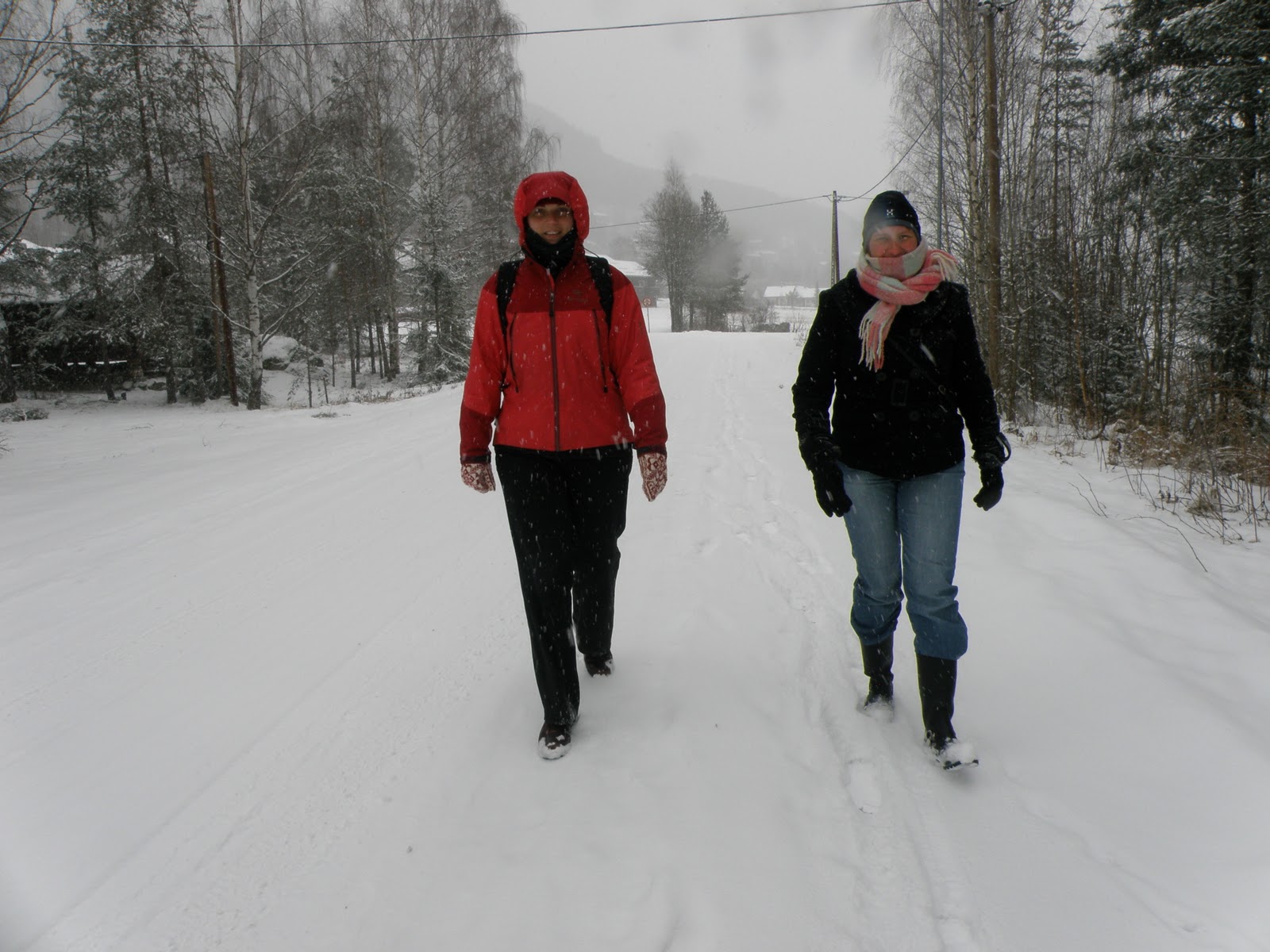 The snow kept falling as I left the two of them to their snuffling and went off to pick up a package from the Post Office. I carried on snowing when I returned and as we sat drinking coffee and eating waffles. 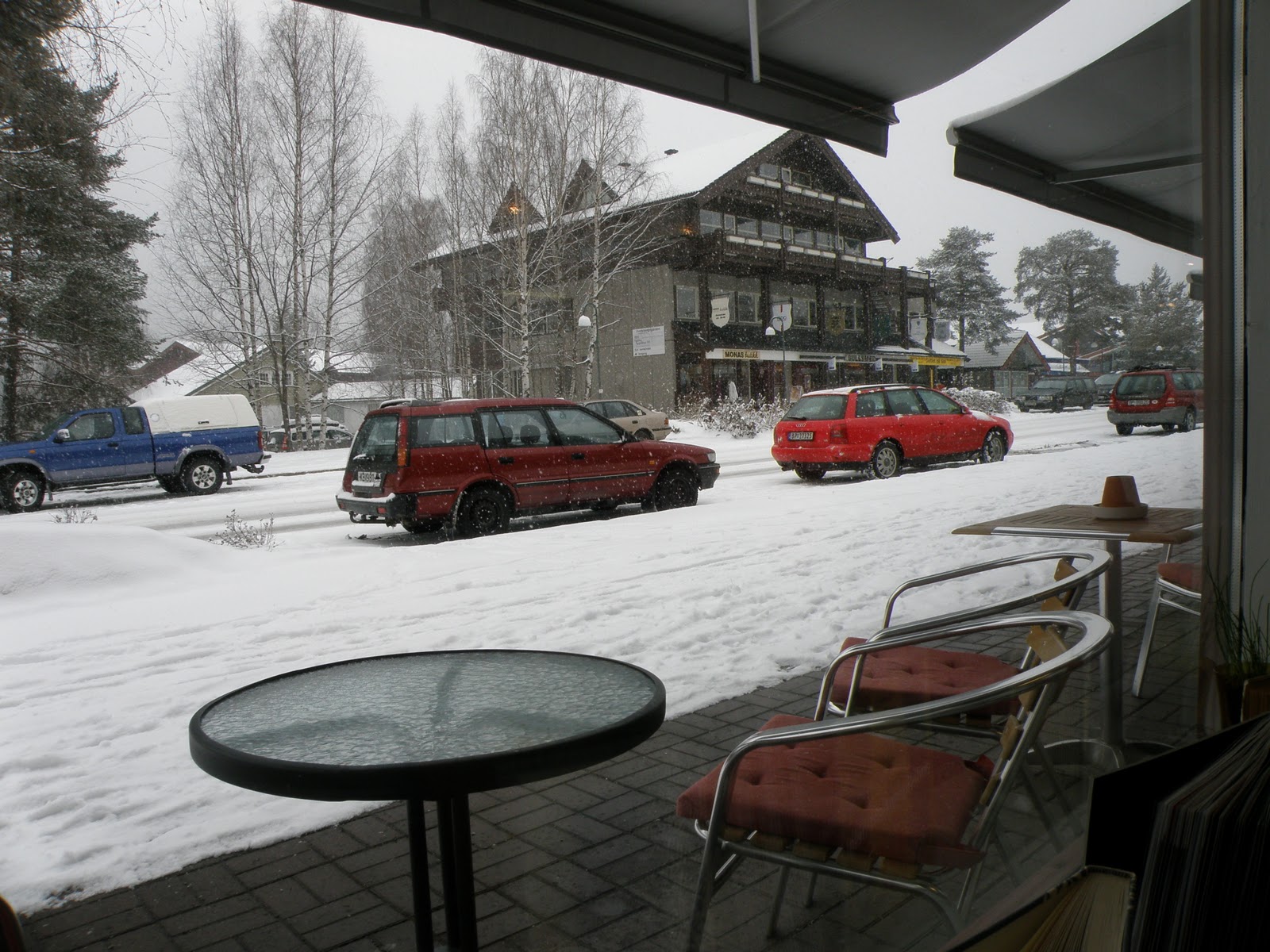 It is still snowing outside as I write. Although tomorrow is the first day of April it is clear that winter hasn’t finished with us yet. The new snow hides treacherous patches of old ice and I came a cropper on the way down into town falling flat on my back. It happened so quickly that I didn’t have time to be surprised. I’ll watch my step this evening on the way to choir.

Despite this, the snow looks really lovely out there and a layer of new snow will be good for the cross country ski tracks.

Some types of information, such as facts, global concepts, neat ideas, I can pick up out of texts in English, Norwegian, Dutch or German with ease. However, texts that contain not just concepts, but also lots of detailed rules such as the mathematical basis underpinning the theory of tri-axial stresses in solid engineering materials, leave me confused. I don’t know what to do with the information I have just read, and at university could never relate the theory we received in lectures with the corresponding tutorial questions. They seemed completely unrelated to each other.

The problem is that rules and detail seem to be handled by one part of my brain, whilst language, both spoke and written by a completely different and unrelated part of my brain. [Aside: Actually the written language I create is a written record of my spoken language. For example, I can only place commas in sentences (irrespective of which language I am using) by speaking the text in my head and seeing where the pauses should be.]

This leaves me with a big problem whilst learning a new language. Almost all language courses focus on learning grammar as theory and detail, rules and regulations. I picked up most of the Dutch I have learned by learning to speak the language. The two sets of evening classes I took at the Volksuniversiteit whilst living in Utrecht, taught me grammar the traditional way, which went into the rules and detail side of my brain whilst the communication side of my brain continued to forage for the rules of Dutch grammar in the conversations taking place around me.

It has taken me this long to work out that my brain functions like this. I started considering the problem when I realised that I could bat through ten grammatical exercises on our web based Norwegian course, getting scores of 90-100% on the first go at the excercise, whilst still not be able to make any use these rules. Although I can talk reasonably fluently to people I know, I can still stop dead whilst trying to create spoken Norwegian in other situations.

Curiously, my written Norwegian seems to be quite good, especially when I get inspired to write in Norwegian. I can use the high level sentence structures quite effectively whilst continuing to make a plethora of minor grammatical errors. This has something to do with the fact that Norwegian sentences are quite similar to English ones. Dutch sentence structure is closer to German than either English or Norwegian. I never did get the hang of the Dutch and German grammatical rules that piled verbs up at the ends of sentences. That took the fun out of using those languages and made it a chore to construct complex (conditional) sentences.

So I guess I’ll just have to carry on doing those ‘pointless’ grammar exercises, aware that they won’t really help me use the language. I’ll carry on trying to write Norwegian, keep reading books in Norwegian and the Hallingdølen

My full mastery of the Norwegian language will come, given time, as my subconcious grazes on the grammar hidden away in the everyday conversations around me.